Trip to the Molly Brown House 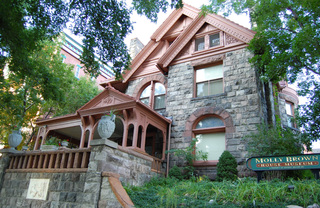 Looking for a cool daytime outing to mix things up at the apartments for rent in Denver, CO? A trip to the Molly Brown House Museum in historic Denver might just fit the bill, especially if you’re keen on learning a bit more about Denver’s past and one of its more unique residents of the past century:

So, who was Margaret Brown, what’s was her legacy left on Denver, and how is her home, now the site of this intriguing museum, significant? Those are exactly the kinds of topics we’ll be exploring today, as we delve into the details of the Molly Brown House Museum and its former owner.

Who Was “Molly” Brown?

Margaret Brown was a socialite and philanthropist of the 19th and early 20th Centuries, having earned the nickname “The Unsinkable Molly Brown” after she survived the disaster that was the crash of the RMS Titanic in 1912. Her legacy goes far beyond merely outliving that fateful night on the Atlantic Ocean, however, as her thirst for adventure and dedication to social reform were hallmarks of her unique character. After she and her husband became wealthy, she saw the world, championed various humanitarian causes, and was well-known for living life on her own terms. Her journey is best summed up by the following quote:

“In many ways, Margaret was the embodiment of the New Woman of the twenties: free, liberated and self-sufficient...While her mythology reveals how the West and western women are seen in the American imagination, the true story of how she navigated a changing America tells the American story in unexpected ways.”

Her story is a long, albeit interesting, one. If you’re interested in reading up on more about this hero of the 20th Century, you can do so via her condensed biography, courtesy of the Molly Brown House Museum. You’re probably also interested in learning more about the museum itself, however, and what exactly makes it such an intriguing place to visit. We’ll be covering that in our next section.

More About the Museum

What is now known as the Molly Brown House Museum was once Margaret Brown’s home — built in the 1880s by architect William Lang, and sold to Mrs. Brown and her husband, JJ, in 1894 by the original owners. The title for the home was transferred solely to Margaret in 1898, and since she traveled often, she would rent it out to interested parties (it even served as the governor’s mansion in 1902). Mrs. Brown converted the home into a boarding house in 1926, and it would remain such until her death in 1932. It was, shortly thereafter, sold for a sum of $6,000, and came close to demolition in 1970, after it sat in disrepair for many years.

This was until a group of local residents, Historic Denver Inc., raised the money to purchase the home and restore it to its former glory. They still own the house, located at 1340 Pennsylvania Street, to this day, and operate it as a museum detailing Margaret Brown’s life and history:

As a part of their mission, Historic Denver has amassed a large collection of more than 10,000 items that help them in retelling the story of Margaret Brown and interpreting her life and impact. These items include clothing and accessories like Mrs. Brown’s purse, gold watch, and earrings. They have furniture, such as Mrs. Brown’s sofa, collections of art and dining ware belonging to Mrs. Brown, and even an assortment of photographs, writings, and other items by or about Mrs. Brown and her life. These all come together to tell her tale, and form the basis of some of the permanent exhibits the museum runs, like the “House Museum.”

This guided tour takes you on a grand walkthrough of the home, featuring three full floors and 16 rooms, as you’ll “walk into the elaborate golden entryway designed to impress the Browns’ guests, view the library with floor-to-ceiling bookcases, experience the Browns’ private sitting area and bedrooms, and glimpse the living and working quarters of their servants.”

Another permanent exhibit includes an examination of JJ Brown and the savvy business moves he made to turn himself and Margaret into millionaires. You’ll also learn about the impact that mining had on the people of Colorado, and how it was instrumental in turning Denver into the world-respected metropolis you see before you today.

And then there are the rotating exhibits that come through the museum every so often. Looks at the many denizens who called the property home after Mr. & Mrs. Brown departed this earth, and their unique life stories that tie into the greater history of Denver. It all makes for a riveting exploration of the town’s culture and significance, and a perfect outing if you want something educational to do on one of your days off!

When you’re living at conveniently-located student apartmentslike CoLab, wonders like the Molly Brown House (and many more) are all well within reach. Being situated firmly in downtown tends to do that for a community, as does the proximity of a range of fine public transportation options. None of what Denver has to offer is ever too far away here, so if you’re looking for the perfect place to set up shop for the ultimate city experience, look no further. Check out what CoLab has in store, and reach out to learn how to make one of these amazing apartments your very own.