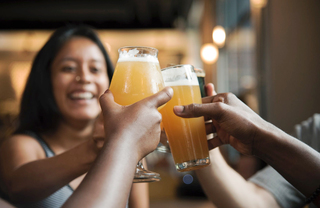 Even if you’re a newcomer to the student apartments for rent in Denver, you probably know that the Mile High City and beer go hand in hand. What you may not have known, though, is that the two go together so well that Denver has its very own festival dedicated to the delicious golden nectar: the Great American Beer Festival.

Since 1982, folks from all around have flocked to Denver yearly to enjoy this combination festival and competition. On one hand, it’s like a public tasting event, where individuals can sample some of the best in today’s craft beer. One the other hand, this is a fierce contest where entrants have their craft creations evaluated by professional panel of judges, with the victor taking the golden prize.

If this sounds like your kind of show, we suggest you keep reading. Today, we’re going to delve into the history of this Denver tradition, what it’s all about, and what you’ll need to know about this year’s iteration before you go.

The Great American Beer Festival started back in 1982, but those first few expos weren’t held directly in Denver. The festival actually started at the Harvest House Hotel in Boulder, CO, with some 24 breweries, 47 beers, and 800 attendees at that first event. Things moved to Denver in 1984, however, and after a while the event built a reputation for continual success.

During the 10th year of the Great American Beer Festival, it drew in 150 breweries, 500 beers, and 7,000 attendees. It was a new record, but the festival still wasn’t done growing. A rapid expansion of popularity spurred on the festival’s move to the Colorado Convention Center in 2000, and since then, it’s continued to make enormous strides in attendance:

“Demand for tickets is at an all-time high. The 2007 festival sold out the week of the event, while the 2014 event sold out in just over four hours.”

So, it’s easy to see that the event is popular, but what makes it such? What happens within the confines of this event that has people so energized? According to the Brewers Association, the organizers of the Beer Festival, it’s a simple concept that’s able to draw people in year after year:

“Attendees [have] the opportunity to tour America’s brewing landscape, one ounce at a time, with access to more than 4,000 different beers from over 800 of the nation’s finest breweries. The GABF gathers practically every type of beer from all of the regions of the country, and are arranged alphabetically in the festival hall.”

That’s all there is to it. Get the best beer from all over the nation, bring it to one location, and watch the visitors flock. The efficacy of this “basic” strategy was able to bring in more than 60,000 attendees last year, and will likely do as many or more again this year. You can expect crowds when you head to the Convention Center, along with plenty of beer and a number thrilling events to boot.

What to Expect at This Year’s Festival

Like years past, there will be a great many breweries and types of beer to sample during the festival. It’d be crazy to try to list them all here, but you can check out the links above and see that there’s no shortage of variety among those offerings — more than 4,000 beers from 800 breweries, to be precise.

It’s not just about standing around sipping fine beer, however (though that is a large part of the experience). There are scheduled events going on all week, from Monday, September 17th to Saturday, September 22nd. Events like Geeks Who Drink, the pub trivia challenge that covers “everything from celebrities in trouble to wordplay to bad television,” or preview night for the brand-new BASEketball league from Declaration.

That list of events goes on and on, and is accompanied by the large number of GABF Hangout Spots. These “spots” feature amazing company and one-of-a-kind beers, so you should familiarize yourself with where they are beforehand so that you can stop by and sample some of those specialty drinks. This year’s list contains 9 in total:

Most anticipated of all the Great American Beer Festival events, however, is the fabled beer competition:

To do this, the judges taste beers representing various style categories (without knowledge of which beer belongs to which brand), then award the top three their respective prizes: gold, silver, or bronze. There are 102 beer categories in all, so that will amount to a lot of judging to get done over the course of the festival.

You’ll not want to the miss the action, and, if for whatever reason you can’t make it out, you can at least live stream the awards ceremony to learn the results. There’s action like this all around at the GABF. Be sure to learn more about getting a ticket for the event and heading on down there to see the best in beer from all over the nation.

Every once in a while, it’s a good idea to take a trip outside the lovely residences of places like COLAB and see what the city has to offer. This is great opportunity to do so, and it should be an easy enough feat to accomplish being right in the heart of downtown Denver. You’re centrally located among Denver’s best, and but a short jaunt away from the closest light rail station, so getting around is a breeze. Set yourself up for the ultimate Mile High City experience by making COLAB your new home today.