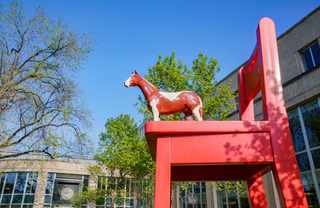 Here’s something that may come as a bit of surprise: young people really love libraries. A study from Pew Research indicates that “53 percent of those aged 18 to 35 said they had used a public library or bookmobile in the previous 12 months, compared to 45 percent of Gen Xers, 43 percent of baby boomers and 36 percent of those in the Silent Generation.” That’s good news for Colorado residents, since on the whole, the state has nearly 100 library districts that see millions of visitors every year. In Denver specifically, one spot towers above them all — Denver Central Library, and if you’ve just set up shop in the student housing in Denver, CO, this is one spot you’ll definitely want to get to know in a hurry. We’ve got you covered on that front. Read on as we get you acquainted with all the pertinent details you’ll need to know about this legendary institution.

Learning About the Library

Denver Central Library is, as you might expect, part of the Denver Public Library system, which serves both the city and county of Denver. DPL consists of 25 locations, housing over 2 million items that include books, photographs, movies, music, reference material, and all the other things you’d expect to find at your friendly neighborhood library.

The Central Library, located on West Fourteenth Avenue (right next to the Civic Center Park), is part of the National Register of Historic Places. Unsurprisingly, books are a major focus here, but being a historic site, there’s also a lot of focus on the Central Library’s architecture. So much so that there’s an entire section of their websitededicated to talking about it. The chief architect of the Central Library’s North Wing, the original structure created in the 1950s, was Burnham Hoyt, a “gifted and visionary architect” who was also responsible for other Denver landmarks like “the amphitheater at Red Rocks State Park and the State Capitol Annex Building.”

Hoyt isn’t the only notable individual to contribute to the building’s design, however. Central Library’s 1990s addition was done by the one and only Michael Graves, “hailed worldwide as a co-founder of the Postmodern school of architecture,” and the brains behind other well-known structures such as “Walt Disney Corporate Headquarters in Burbank, California; Disneyworld Swan and Dolphin Hotels in Orlando, Florida; The Portland (Oregon) Building; and The Humana Building (Louisville, Kentucky).”

So, that explains a bit of the history behind Central Library’s past, but what about the present? If you think it’s just as ho-hum as coming in and reading a few books, you’d be sorely mistaken. Central Library is also the home of three different book clubs:

You can find more about the book clubs’ specific calendars of events here, and can even sign up for some of the online book clubs, but one of the coolest things about Central Library is that it’s not all about recommendations on which novels to read or getting together to discuss books for hours on end (though those are both admittedly pretty fun). There are always amazing and informative events taking place at the Central Library branch, as a quick peek at the event calendar will quickly inform you.

For example, the library holds regular exhibits, like the noted display of historical imagery and artifacts, and selections of works from various galleries and art departments. Just a few such examples include:

If you never thought you’d be able to get some computer training in a library setting, think again. Classes like Skype Basics and Drop-In Tech Help go over those technological questions you’ve been dying to know the answers to but unsure of who or where to ask them. The Fix & Mend Meetups offer a great space to bring in broken items and repair, upgrade, or simply dismantle them amongst like-minded tinkerers, and live performances like the Children’s Concert and the Orpheus Pagan Chamber Choir give folks a chance to show off their musical prowess.

Perhaps one of the most interesting aspects of the library, though, is the revolutionary ideaLAB:

“ideaLABs are makerspaces: free community spaces to make things. Do you need to produce videos, create games, make music, or learn about electronics? We aim to provide the tools and resources you need to make your projects happen.”

During these “open labs” you can make use of the tools the library has available to express your creativity in any number of ways, all while receiving input, feedback, and encouragement from other “makers” much like yourself. The lab at the Central Library is great for those who want to dabble with videos, games, music, art, crafts, and the like, and, best of all, it’s free to everyone. What are you waiting for?

The Wonders of the Library Are Easily Accessible From Student Housing in Denver, CO

Amazing, student-focused communities like Colab are just a mile away from Denver Central Library, and smack dab in the middle of all kinds of excitement in the city. Easy access to what Denver has to offer along with spacious residences and killer amenities? It’s a hard package to top, and if it sounds like your kind of apartment, be sure to get in touch to find out about everything Colab has to offer and to learn about our availability today.