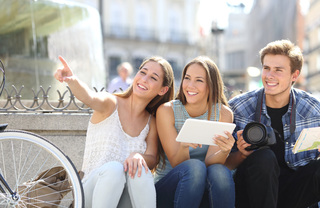 The streets outside the apartments in Denver hold a great many treasures to explore. Few, however, can capture the historic beauty and majesty of the Denver experience quite like the Civic Center neighborhood (the city’s artistic and communal heart), and its crown jewel, Civic Center Park:

“Denver Civic Center is significant architecturally as an American expression of Beaux-Arts classicism derived from historic motifs of ancient Greek and Roman architecture as translated by architects trained at the influential École des Beaux-Arts in Paris.”

It is a beautiful sight to behold, and one that you’ll definitely want to check out once you get into the swing of living in Denver (if you haven’t already), so today, we’ll be taking a look at what awaits in Civic Center, and what makes that gorgeous park one of the most pristine in the nation.

Where Is Civic Center Park?

Located in Central Denver, south of Colfax Avenue and south of the Central Business District is where you’ll find the most impressive features of the Civic Center. More specifically, Civic Center Park is located at the intersection of Colfax and Broadway (widely considered two of Denver’s most important thoroughfares) and bordered by Bannock Street on the west, Lincoln Street on the east, Colfax Avenue on the north, and 14th Avenue on the south.

The Features of Civic Center Park

Take a quick look at this map of Civic Center Park. Notice anything? Keen eyes will have picked up on the fact that Civic Center Park (and the adjacent area) are home to a few impressive features, like the Greek Amphitheatre. This structure, a fantastic representative of the Civic Center’s architectural style, is well-known for its impressive curved seating, lovely murals, and, of course, high-quality stone construction:

“The beautiful stone used to erect the Greek Theater and Colonnade of Civic Benefactors is Turkey Creek sandstone, which was quarried in Stone City near Fort Carson in Pueblo County, Colorado. This gorgeous cream-colored stone is fine grained but has a light pink hue with purple veining.”

The theatre itself can seat some 1,200 guest, and is used frequently for special events like concerts and performances. Across from the Greek Amphitheatre, you’ll find the John H.P. Voorhies Memorial, created in 1921 as a tribute to the wealthy mining and real-estate investor with whom it shares its name. It’s made from the same type of stone as the theatre, giving it a similar aesthetic quality. In fact, you’d be forgiven for assuming they were both part of the same structure!

These aren’t the only features that draw visitors to the Civic Center area, however, as the grounds around the park are also home to the Central Library, the Denver Mint, the Denver Art Museum, the City and County Building of Denver, and perhaps most notably, the Colorado State Capitol Building. At first glance, you might confuse it for the US Capitol in Washington DC, a resemblance that is wholly intentional:

“As inspired by the 1893 Chicago World’s Columbian Exposition and 1900 Macmillan Plan for Washington, D.C., Denver Civic Center evolved between 1890, with the beginning of construction of the Colorado State Capitol, and 1935, with the completion of the Denver City and County Building.”

This historic white-granite building took more than a decade to build, and features a gold-leaf dome as a reminder of the Colorado Gold Rush. Inside, the structure is adorned with Colorado Rose Onyx, a type of marble specific to the Colorado area. It adds to the building’s majesty and beauty, a beauty that had it added to the National Register of Historic Places in 1974, and to the National Historic Landmark District for the Denver Civic Center in 2012.

Events at the Civic Center

The Civic Center, being a popular and central city location, is known for hosting notable events throughout the calendar year. While there might be too many to list in their entirety, we can highlight some of the most popular recurring events that tend to pop up annually, which include:

You’ll want to keep your ear to the ground and your eye on event schedules to ensure you can make it down to Civic Center Park whenever one of these legendary events take place - they’re well worth the visit, we can assure you.

Civic Center: Past and Future

Civic Center and Civic Center Park got their start as initiatives by former Denver Mayor Robert W. Speer, in 1904. Speer envisioned a series of city enhancements and beautification projects to rival other major American cities, and through his tenure the Civic Center started to come to fruition, as did the idea to improve many of Denver’s other parks and landmarks. Though progress hit a snag when Speer was defeated as mayor in 1912, but upon his re-election in 1926, he returned to the swing of things, getting Civic Center Park up and running by 1919.

Civic Center has remained a locus of Denver activity since its inception, and the city hopes to continue improving the area for years to come. Enhancements include attempts to make the park more accessible to residents across the city, and the addition of new buildings that will add to the aesthetic of this already photogenic Denver district.

It’s Not That Far From the Apartments in Denver

Civic Center Park is actually less than a mile away from the stunning apartments at CoLab. This makes it a prime target for your urban adventures, but know that once you’ve covered every inch of Civic Center and its wonders, the excitement doesn’t need to end there. CoLab puts you near many more Denver hotspots, so a good time is never too far away, no matter which direction you set out in. Learn more about what these contemporary downtown residences have to offer today, and how you can make this your new home among the majesty that is Denver.