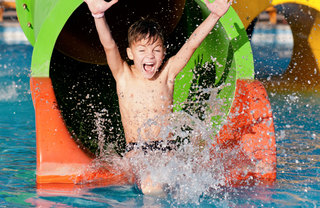 You’ve already been successful in finding some stellar downtown Denver apartments near campus now find yourself something fun to do in the area too! Denver, as it turns out, is chock full of diversion in the form of cool theme and amusement parks, so if you’re looking to have a great time, you need only hit up one of the following establishments.

One of the biggest and most recognizable names in town is the Elitch Gardens Theme & Water Park. Sometimes just referred to locally as Elitch’s, this spot is unique for its close to downtown location and many rebrandings over the years, but also its wealth of fun activities.

What can you get up to with you’re at Elitch’s? The various “thrill rides” and rollercoasters are always a great choice for those who love the high-adrenaline experience. The list of those rides, by the way, is quite long, including options like:

They’re all sure to pack a punch, but if you’re not so much the coaster or thrill ride type, you can take solace in the fact that this theme park also includes an awesome water park as well. It’s open from Memorial Day though Labor Day (meaning there’s still a little time left to enjoy) and it’s the premiere Denver destination for some in the water fun.

Note that Elitch isn’t the only game in town. You might also enjoy yourself over at the Lakeside Amusement Park on Sheridan Boulevard. As the name suggests, this park is indeed by a lake, and the pristine setting makes for a great time for the whole family.

Specific offerings at the park include a merry go round, a drop tower, bumper boats, various roller coasters, sports cars to enjoy, a plethora of spinning rides, and even a children’s playland specifically for the kids.

Younglings aren’t the only ones who will enjoy this park, though. Lakeside is a great destination for all sorts of groups, including company picnics, birthdays, family reunions, church picnics, little league awards ceremonies, summer camp outings, school field trips and more. Even if you’re just flying solo, though, this will be quite the adventure.

You’ll just want to make sure you’re paying attention to the calendar so you know exactly when Lakeside will be open. Their hours do change sometimes, and its better to be aware than to be shocked they’re closed!

The theme and amusement parks aren’t the only thing you’ll be enjoying around cool communities like Colab. You’ve got a whole exciting downtown Denver neighborhood to call your stomping grounds, and plenty within that will hold your interest. What will you make of it? Come and find out for yourself. Learn what Colab has to offer, then put this at the top of your list for new downtown Denver apartments.