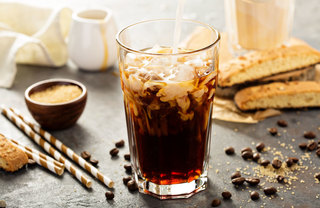 Denver might have a reputation as a beer town, but frothy beers aren’t the only “cold brews” you’ll find that are popular in this town. The areas around the student housing in Denver, CO are also home to quite a few places to get cold-brewed coffee.As Forbes has pointed out, the once-niche drink has been making some huge strides in recent years and picking up steam, figuratively speaking:

“If you follow coffee trends, you first heard about cold brew coffee years ago. But it's taken forever for cold brew to get traction beyond coffee bars. Now, cold brew is making its move. In 2017, sales of cold brew coffee jumped to $38.1 million, a 370% jump from the $8.1 million in sales the category saw in 2015, according to Statista.”

In other words, there’s no time like the present to check out who’s got the best cold brews in town, and in Denver, there’s no shortage of establishments to try. Today, we’re going to be laying out a few prominent options, and pointing you in just the right direction to get your cold-brew coffee fix.

Corvus Coffee Roasters has long distinguished themselves as masters of the coffee trade, visionaries who like to think of their brews not just as the goal, but a launchpad for a whole wide world of beverage possibilities. As noted by Westword:

They roast their beans right in-house at their South Broadway location, and from there, bring the best into every batch they brew. When it comes to their cold brews, they implement a stringent, 12-hour brewing process, resulting in an end-product that’s simultaneously smooth and strong, giving you the ultimate caffeine hit while going down easier than mom’s apple pie. It’s probably the reason they have their signature blend on tap at “some of the best hotels and restaurants throughout Denver,” and is certainly more than enough reason for you to check them out.

Head to East Colfax Avenue in Central Denver and you’ll find the appropriately named Hooked on Colfax, the community-dedicated coffee blenders and bakers who splashed onto the scene back in 2005. In addition to the refuge from the madness of urban life they provide in their location near City Park, they’ve also got a handle on how to make some of the best coffee you’ll taste in all the city. They can make it as strong, subtle, or smooth as you like it, and when it comes to iced lattes and cold brews, they’re just as refreshing as you might expect from an expert coffee maker. Pair with a pastry from their bakery, and you’ll have yourself a little slice of heaven.

Coffee and class are what you’ll find at the Blue Sparrow on Blake Street. This establishment made quite the buzz when it first opened up, on account of its fabulous decor and well-designed interior aesthetic:

It’s not style over substance here, though. The coffee stands shoulder-to-shoulder with Blue Sparrow’s looks, and when it comes to the iced blends, they’re as varied and delicious as the hot ones here. Take that cold coffee to go, or head up to the rooftop to sip in peace — either way you’re in for a sublime experience here.

You’ll find multiple Novo Coffee locations around Denver — all of them great. This is a name every Denverite should know, and they’ve been around on the denver scene since 2002 serving up great coffee for all who grace their doors. They place an emphasis on their meticulous process, which results in some truly legendary brews, and when it comes to the cold stuff, you’ve got to try their nitrogen-infused cold brew:

“For those unfamiliar with this technique, the cold brew coffee is served through a beer tap and infused with nitrogen which creates a creamy texture, comparable to that of a Guinness or any similar stout beer.”

Combined with their expert coffee knowledge and amazing raw ingredients, this nitrogen infusion process further enhances that great taste, and packs a nice bit of extra punch that you’ll surely enjoy on a hot summer day.

Stella’s on South Pearl Street has a coffee history dating back more than 25 years, and should you find yourself over near Washington Park, you’ll definitely want to stop in for a quick drink and a pastry. Lattes, matcha teas, cakes, breads — they’ve got a bit of everything here, and their iced coffee is nothing to scoff at either.

Topping off the delicious drinks and pastries is a welcoming and friendly atmosphere, a “social environment” as they call it, where patrons join in a sense of camaraderie and everyone might actually know your name if you make yourself a regular at this establishment.

One thing you might have noticed about those great coffee spots is that they’re all within striking distance of fabulous downtown communities like Colab. You’ll find that holds true about a lot of great places to see in Denver, as these apartments occupy what might be one of the most ideal positions in the city, giving you access to the wonders of Denver like few others can. Come and experience the best Denver has to offer for yourself, see what Colab can offer you, and make this your new home in the Mile High City.