Top Holiday Movies of All Time 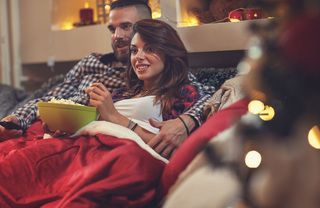 It’s that time of year again, which means residents across the city are getting in the festive spirit. There’s nothing quite like cozying up with hot cocoa and an oversized blanket while watching classic holiday films. While staying warm in the apartments for rent in Denver, CO, put these top 10 flicks on your must-watch list this year.

Considered one of the most cheerful films of the season, White Christmas is filled with musical numbers and heart-tugging scenes. A singing duo played by Bing Crosby and Danny Kayne team up with two sisters to perform a show in rural Vermont. Once they arrive, they learn that their old WWII commander’s local inn is failing financially and decide to put on a musical extravaganza to save the business.

If you love Billy Bob Thornton, then this hilariously offensive comedy is right up your alley. Thornton plays Willie, a man who robs shopping malls after becoming their Santa for the holiday season. Aided by his partner in crime, Tony Cox, the duo has been incredibly successful until now.

Thornton’s character has become a depressed alcoholic mess, and its starting to show. During his drunken escapades as a mall Santa, he encounters a young boy who forcibly becomes his friend. Can this child bring out what good is left in the conman, or will his life of crime finally catch up to him?

Bishop Henry Bougham, played by David Niven, is in charge of a failing cathedral. When he turns to his faith for a help, he is visited by a man named Dudley claiming to be an angel. Dudley quickly integrates himself into every aspect of the bishop’s life, intervening in Henry’s struggles and garnering the attention of his estranged wife. More than a little annoyed, the bishop decides to challenge heaven.

It doesn’t get much more classic than the beloved 1951 adaptation of Charles Dickens’ A Christmas Carol. Who doesn’t love watching the mean-spirited Ebenezer Scrooge go from one of the most heartless men in fiction into someone who truly understands the meaning of Christmas. The 1951 film is considered the definitive version, and Alastair Sim’s Scrooge is acting at its finest.

On the hunt for the perfect gift for his son, a gadget salesman finds himself in a Chinatown store selling odds and ends. There, he finds a strange creature called a Mogwai that comes with a very specific care routine. A few mishaps and unheeded warnings later, and the creature has reproduced a gang of gremlins that set out to destroy the town on Christmas Eve. If you’ve never watched this film, it’s an excellent laugh with a horror twist.

Will Ferrell immediately turned this awkward comedy into a holiday classic thanks to his antics and its ridiculous yet heart-touching story. Buddy the elf was accidentally taken to the North Pole as a child, but realizes he doesn’t fit in as an adult. So, he heads to New York in search of his father. As the two pursue a relationship, their cynical businessman and child-like attitudes create a series of chaotic events that leave you in stitches.

7. A Charlie Brown Christmas, Rudolph the Red-Nosed Reindeer, and How the Grinch Stole Christmas

These three films are combined because they are all classic animated films for the holiday. Chances are, you grew up watching these as a kid. If you haven’t seen their warm, delightful, cheery messages, then this is the year to see what you’ve been missing.

The Macy’s Day Thanksgiving Parade has a problem, the Santa they hired is too intoxicated to work. Luckily, a man by the name of Kris Kringle steps in and makes the parade a smash hit. Before long, he’s a regular attraction at the Macy’s in midtown Manhattan. When he starts claiming that he is the real deal and promoting yuletide joy instead of commercialism, however, the state ships him off to a mental ward. Will an upcoming court case reveal a sad tale about an old man, or will New York find new faith in the true spirit of Christmas?

Considered the quintessential holiday movie, It’s A Wonderful Life stars James Stewart as George Bailey, an instrumental businessman in the town of Bedford Falls. George has spent his entire life sacrificing his dreams for the good of the town, ensuring that an old miser cannot make everyone’s lives miserable. When a financial mishap leaves his business in shambles and himself in legal trouble, the crushing weight of his selflessness leaves him contemplating suicide on Christmas Eve.

A guardian angel, Clarence, is tasked with saving George’s life in order to earn his wings. The two embark on a magical journey that shows George what Bedford Falls and the people in it would be like if he had never been born. What follows is a unique story about how success isn’t measured by monetary gain.

There’s a reason TBS puts this film on repeat during the 24th and 25th of December. The holiday antics of Ralphie Parker and his family are as iconic to the holiday season as wreaths and decorated trees. From the Red Ryder air rifle to the leg lamp, this classic earns the top spot on any holiday movie list.

While you’re cozying up to these top-rated holiday films, why not do so in luxurious style. COLAB is a brand-new campus-adjacent urban basecamp equipped to satisfy your everyday needs while fueling your mountain spirit. These homes embody the conveniences of downtown Denver in a mix of polish and flair that raises the bar for student apartments.

This apartment community features a variety of carefully curated amenities that offer everything you need right outside your door. Conquer your obligations in the tech and conference rooms, hang out in the clubhouse, or relax after a long day in the resort-style pool. Entertain your guests in the movie lounge or take in scenic views of the city in the roof deck. Stay in shape with a state-of-the-art fitness room and yoga center. Whatever you need, its all right here.